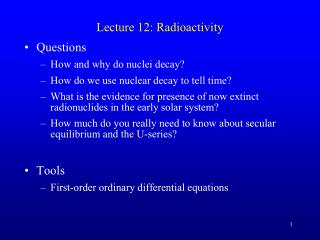 Lecture 12: Radioactivity. Questions How and why do nuclei decay? How do we use nuclear decay to tell time? What is the evidence for presence of now extinct radionuclides in the early solar system? How much do you really need to know about secular equilibrium and the U-series? Tools