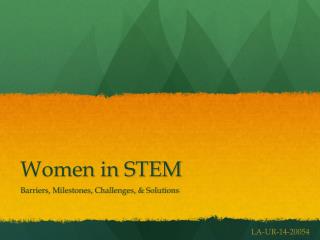 WOMEN in STEM - . veronica i. arreola step meeting. strategies for retaining women in stem at the undergraduate level.

Barriers facing Women and Minority Faculty in STEM - . 1. why women stem faculty matter. having a female professor has a

Girls in STEM: A New Generation of Women in Science

Why are Women and Minorities Still Underrepresented in STEM Careers? - . susan metz founder and past president women in