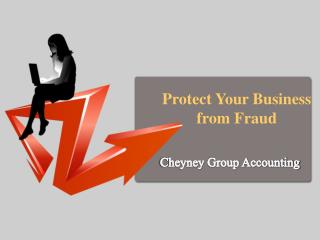 Protect Your Business from Fraud: Keep Your Financial Information Secure Fraud: It’s a Bigger Problem Than You Think Your growing business has to fend off many different kinds of threats: competition, economic changes, and the rising costs of goods or human resources—the list can be long. But one large threat to your business can be a silent, looming killer—fraud. Fraud comes in a variety of forms, including credit card and check fraud as well as employee theft. Some of the most common types of employee fraud include stealing assets either directly or through kickbacks from third parties. Some specific examples include: taking bribes from customers/suppliers, claiming undue overtime, stealing company secrets, or embellishing an expense account. Regardless of the nature of the fraudulent activity, the propensity for loss is tremendous. According to a survey of small and medium businesses conducted in October 2007, more than a quarter of business owners have been the victim of fraud. Fraud can threaten the stability of a business by resulting in significant financial losses. According to the survey, business owners who were victims of fraud had lost an average of $38,000 each—and four in ten had lost more than $50,000. Small Business Internal Controls - Size of victim organization by number of employees (2006 report to the nation).

Implementing CEP with SOA - . objective: introduce and stimulate thinking. some event basics the union of cep and soa

Cheyney Group Marketing - Is a firm providing website and practice development services to the accounting industry. the

Identity Fraud - . today you will . . . take steps to protect yourself against fraud. what’s in your wallet? give

Ethics in Business and Society - . have i committed any of the following white collar crimes? fraud -- land fraud,

THE “F” WORD IS FRAUD A RISK? - . christopher r. dunn dutton brock llp. what is insurance fraud? any act or omission

05 Accounting &amp; business ethics - . english for economics: geoff cockayne 2011. what is accounting?. the

Learning Objectives - Power notes. chapter 1. introduction to accounting and business. 1. nature of a business 2. the