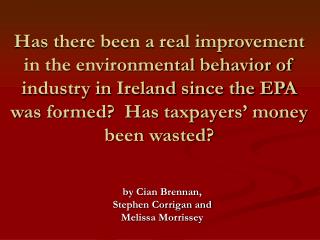 Has there been a real improvement in the environmental behavior of industry in Ireland since the EPA was formed? Has taxpayers’ money been wasted?. by Cian Brennan, Stephen Corrigan and Melissa Morrissey. Before EPA Creation. Local Authorities were in charge Too many of them

Us vs Them (Morrissey vs Nugent) - . rocks don’t care what you do to them trees lack sentience animals experience Cohort A Project-wide Data - . “our goals can only be reached through a vehicle of a plan, in which we must fervently