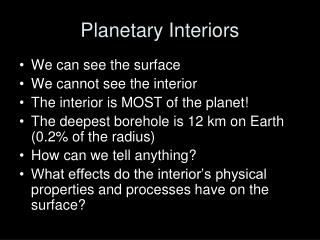 Planetary Interiors. We can see the surface We cannot see the interior The interior is MOST of the planet! The deepest borehole is 12 km on Earth (0.2% of the radius) How can we tell anything? What effects do the interior’s physical properties and processes have on the surface?. EART162: PLANETARY INTERIORS - . course overview. how do we know about the interiors of (silicate) planetary bodies?