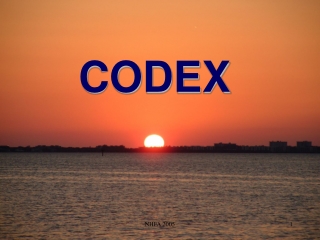 Codex-Washingtoneus - . the oldest manuscripts of the gospels. all new testament manuscript images are taken from the

CODEX ALIMENTARIUS IN ROMANIA - . national contact point on codex alimentarius is within national sanitary veterinary and

Basel II Operational Risk - . an overview of where we are as at 30 th september 2004. this presentation is annotated.