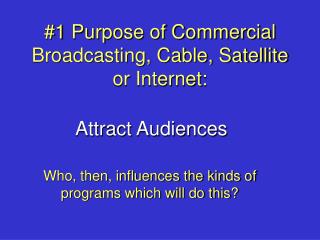 #1 Purpose of Commercial Broadcasting, Cable, Satellite or Internet:. Attract Audiences. Who, then, influences the kinds of programs which will do this?. Advertisers Set the Trend. Narrowcasting Demographics Psychographics Segmentation. Programs follow the trend. Consumer Targets. SABC s Funding Model Options for the Future - 2. purpose of this presentation. sos has few (any?) hard commercial

Broadcasting - . the fcc says the term “broadcasting” means transmissions intended for reception by the general

Green technology in broadcasting - . sang jin kim institute of technology sbs. what can we do?. save energy consumption

Digital Video Broadcasting - . the next wave. http://www.dvb.org. why digital broadcasting?. more efficient use of

Digital Video Broadcasting - . the next wave. http://www.dvb.org. why digital broadcasting?. more efficient use of

How To Use SMS Broadcasting - Marketing Automation Solution - Https://www.ictbroadcast.com/sms-broadcast ictbroadcast is