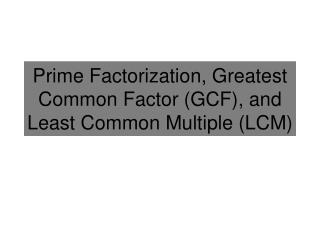 Prime Factorization, Greatest Common Factor (GCF ), and Least Common Multiple (LCM). Definition of a Prime Number. A prime number is a whole number greater than 1 AND can only be divided evenly by 1 and itself . Examples are 2, 3, 5, 7, and 11 . Multiple Prime Bids vs. Single Prime GC Bids - . about the concerned contractors of pennsylvania . the concerned

Planning for Common Core - Lesson planning to prepare for common core. let’s get started!. may 23, 2012. planning for