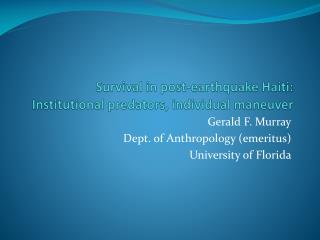 M7.0 EARTHQUAKE STRIKES HAITI - Location. . it was the largest quake ever recorded in the area and the first major one

Haiti: After the Earthquake - . french ii culture project by jean-luc. the national palace in port-au-prince. haiti. the

Haiti Earthquake - . what effects did the earthquake have?. it killed 1/3 of haiti’s population. this effected 3

The HAITI EARTHQUAKE Desktop Reconnaissance - . by randolph langenbach with:. the following slide show will demonstrate a