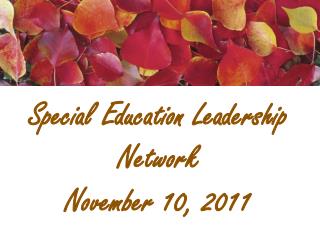 Tracking Student Progress to Meet the Bar for Every Student 2014 Leadership Institute Day 2 - . please connect to the

PEPNet - . advancing educational opportunities for people who are deaf or hard of hearing. pepnet: a national

ELA Teacher Leadership Network - . october 26, 2011. welcome ! while you are waiting:. enjoy breakfast pick up your

Monitoring the Progress of Special Education Students - . the power of progress monitoring: what all special educators

Minority Children in Special and Gifted Education - . issues in identification and referral impressions and