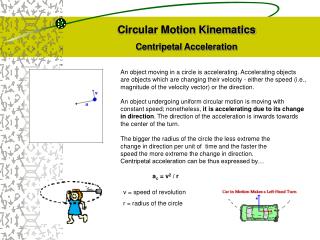 Circular Motion Kinematics Centripetal Acceleration. An object moving in a circle is accelerating. Accelerating objects are objects which are changing their velocity - either the speed (i.e., magnitude of the velocity vector) or the direction. Falling Objects and Projectile Motion - . chapter 3. acceleration due to gravity. what happens if we drop an object? does

UNIFORM CIRCULAR MOTION - Uniform circular motion is motion in which there is no change in speed, only a change in

Chapter 2 - . motion in one dimension. dynamics. the branch of physics involving the motion of an object and the

Chapter 2 - . motion in one dimension. 2.1 kinematics. describes motion while ignoring the agents that caused the motion