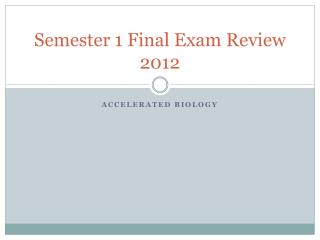 Semester 1 Final Exam Review 2012. ACCELERATED BIOLOGY. Unit 1. SCIENTIFIC METHOD AND BIOCHEMISTRY CHAPTER 1 (OMIT 1:2) CHAPTER 2. 1. What are the 7 characteristics of life? Describe each and give an example of an organism and how it exhibits that characteristic.

English 11 AP Semester 1 Final Exam - . review. make sure you can…. analyze a writer ’ s choices why does salinger

SEMESTER 1 FINAL REVIEW C - . i have created a pile of sheets. take a sheet. work on the sheet. you have been taught how

These vocab words will be on your final exam - . hypertension ethanol arteries leukoplakia gangrene double-check your

Semester Exam Review - . please take out your semester exam review guide and two sheets of notebook paper. if you still

Final Exam Review - . final exam: krieger 205 on thursday, may 7 from 9am-12noon. it will be a comprehensive exam