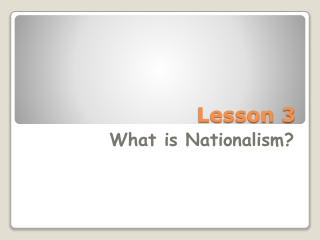 Lesson 3. What is Nationalism?. Fast facts: Since 1990, 33 new countries have been created The dissolution of the USSR and Yugoslavia in the early 1990s caused the creation of most of the newly independent states. Nationalism. What do the above have in common?. Lesson 3 - 3 - . correlation and regression wisdom. knowledge objectives. recall the three limitations on the use of

Lesson # 3 - . various translations of matthew 5:4. blessed are they that mourn: for they shall be comforted. (kjv)

Lesson 3 - . using documents in the dbq. step 1. read the prompt and understand what it is asking! come up with an

Lesson 3 - . the science of nicotine addiction. where does nicotine go in your body?. it goes to your lungs, and then via