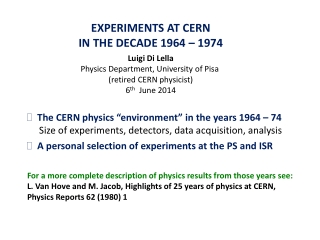 RolandFest - . in honour of roland windmolders, one of the longest serving members of the collaborations studying muon

Neutrinos from Stored Muons n STORM - . a new paradigm for neutrino physics?. motivation. the idea of using a muon

Transients scenarios for the cryogenic operation of superconducting magnets of LHC experiments - . experience at cern

Overview of the participation of the CIS and SEE countries in the LHC Experiments NEC, VARNA - 12 – 16 september 2005

Analysis Tools for the LHC Experiments - . dietrich liko / cern it. acknowledgements. i would like to thank my colleagues