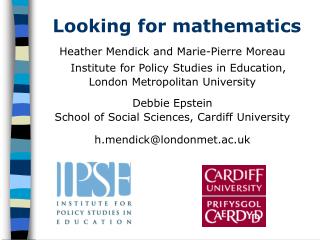 Introduction to Technical Mathematics - . the intent of this presentation is to present enough information to provide the

VEDIC MATHEMATICS - . what is vadic maths?. vedic mathematics is the name given to the ancient system of

JAM (Junior Assessment of Mathematics) - . you will need:. at least 20 counters a hard copy of task 2b worksheet (shown

What Important Mathematics do Elementary School Teachers “Need to Know”? (and) - . how should elementary school

Mathematics for Microeconomics - . the mathematics of optimization. economic theories assume that an economic agent is