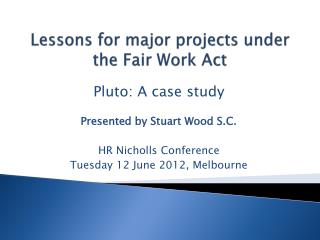 Lessons for major projects under the Fair Work Act Lessons for major projects under the Fair Work Act

TOM PETERS’ LESSONS IN LEADERSHIP2000 3 FEBRUARY SACRAMENTO - . all slides are available at tompeters.com. brand inside

Private Lessons by Joy Jones - . action those who can, teach! today’s lesson: just like any other artist, i practice

A Story of Ratios - . module 1 focus - grade 6. objectives. articulate and model the instructional approaches to teaching

2015 Intel ISEF-affiliated Science Fair Forms - . forms???. required by the society for science and the public and intel

IMPORTANCE OF PAYROLL RECORDS - . payroll is a major expense for most companies and all records must be accurately

Science Class Connect Rules - . respect the classroom and our privileges do not pollute the chat box stay on topic