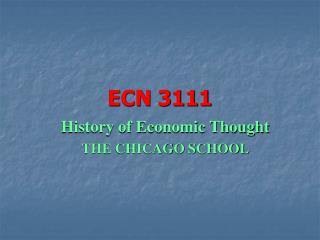 ECN 3111. History of Economic Thought THE CHICAGO SCHOOL. INTRODUCTION. The modern phase of the Chicago School begins in 1946.- when Milton Friedman joined the faculty at the University of Chicago. ECN 3111 - . history of economic thought the classical school – forerunners. introduction. it began in 1776 when adam

ECN 3111 HISTORY OF ECONOMIC THOUGHT - . somebody says: &quot;of no school i am part, never to living master lost my

Milton Friedman and the Chicago School of Economics - . background monetarism the chicago school milton friedman a