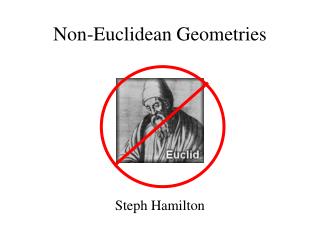 Non-Euclidean Geometries. Steph Hamilton. The Elements: 5 Postulates. To draw a straight line from any point to any other Any straight line segment can be extended indefinitely in a straight line To describe a circle with any center and distance That all right angles are equal to each other. Euclidean and Non-Euclidean geometries, November 25 - Our last topic this semester will once again connect back to the

Non-Euclidean Geometry - . by: victoria leffelman. non-euclidean geometry . any geometry that is different from euclidean

Adventures in Non-Euclidean Distance - . ricky bobinchuck tashauna thompson tosha pelfrey. how would you find the

Euclidean Geometry - . angles, lines, parallels. definitions. segment two points and all points on the line between

ZERO AND INFINITY IN THE NON EUCLIDEAN GEOMETRY - . v

Chord Geometries - Jonathan easey. chord geometries. what is it?. program created by dmitri tymoczko of princeton

Euclidean Algorithm - . by: ryan winders. a little on euclid. lived from 323 – 285 bc he taught in alexandria,

Euclidean Algorithm - . by: ryan winders. a little on euclid. lived from 323 – 285 bc he taught in alexandria, egypt.