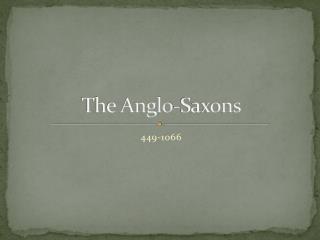 The Anglo-Saxons. 449-1066. The British Legacy. The British had a major influence on America Government Emphasizing personal rights and freedom Literature Language The British was influenced by many others Iberians Celts Romans Angles Saxons Vikings Normans.

The Anglo-Saxons - “anglo-saxon england was born of warfare, remained forever a military society, and came to it's end

The Anglo-Saxon Period - . british literature hopkins. who were the

History of the Anglo-Saxons - . walt: understand who the saxons were. understand where they came from. where did the

The Anglo-Saxons - Historical background. the anglo-saxons. worldview: beliefs. pagan: 1) one of a people or community

Songs of Ancient Heroes: An Introduction to the Anglo-Saxons - . anglo-saxons 449-1066 . the history of england: a

Anglo-Saxons (449-1066) - . i. american culture has been strongly influenced by the british. government language

The Anglo Saxons and Beowulf - . questions to answer. what two tribes first settled in britain? when did the romans

The Anglo-Saxon Period - . history. ancient history and the romans. ancient british history. there were many tribes in

The Anglo-Saxons and The Epic Hero The Epic of Beowulf - . anglo-saxon life - warriors. small groups lived under a

Anglo Saxons(Religion) - . by: britany cohen and shamoni kirksey. developed from the germanic peoples before the coming