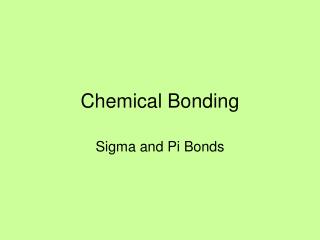 Chemical Bonding. Sigma and Pi Bonds. What is a Sigma Bond?. This is a covalent bond in which the electron cloud overlap is directly between the nuclei of the atoms involved in the bonding. A sigma bond will be formed using electrons in s orbitals, p orbitals, or hybrid orbitals.

Chemical Bonding - . lewis theory of bonding. ionic bonds:. results from the transfer of electrons from a metal to a

Chemical Bonding - . what is a bond?. tell me what you know. are there stronger bonds? weaker bonds? what happens to make