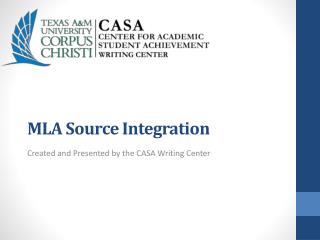 In-Text Citations &amp; MLA - . by the end of this lesson you will know how to create an in-text citation &amp;

Integrating Sources - . what are sources?. primary directly from the person (report) or time (letters / poetry/ books)

MLA Citations - . everything you need to know. works cited page. is last page of paper, and is paginated like one (does

Plagiarism and MLA - . you know you were wondering…. turning in a paper that someone else wrote using other people’s

Integrating Quotations into your Writing - . being able to effectively integrate sources is extremely important!. there

09A_MBM41_EurAqua_powerpoint - . this is the (draft) default presentation of euraqua. question 1: does it meet your

MLA Citations - . composition boot camp lesson 1. why do i need to know this?. g reat question! many assignments in

Documenting Sources: - . how to avoid plagiarism in mla and apa papers. a little story about documentation . . . “my