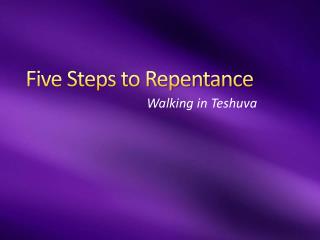 Alma 43-51 - . the war chapters …. captain moroni was steeped in covenant theology the word “covenant” or its

Teshuvah “Repentance” - . there came one day a prophet-man crying in the wilderness he came to tell the people to

Repentance - . starting down the right path. realizing the need. he that covereth his sins shall not prosper: but whoso

REPENTANCE - . faith repentance confession baptism. luke 13:5 “i tell you, nay: but, except ye repent, ye shall all

PROPHET OVERBOARD - . micah. micah was an early pre-exilic prophet during the reigns of jotham , ahaz , and hezekiah ,

Ecclesiastes 3:1-8 - . to every thing there is a season, and a time to every purpose under the heaven : a time to be

Repentance and Confession - . sin. do we all sin? is anyone without sin?. “if we say that we have no sin, we deceive

The Liturgical Year - . the liturgical year begins the first sunday of advent. advent is a time when we prepare for

The Book of Ezekiel - . background. his name means “ god strengthens. ” ezekiel lived during the last years of the

The Shawshank Redemption - . close viewing. the rooftop - freedom. the background of the prisoners is offset by the

The Steps of Salvation - . four of the five steps of salvation we must continue to walk in so we may remain faithful to