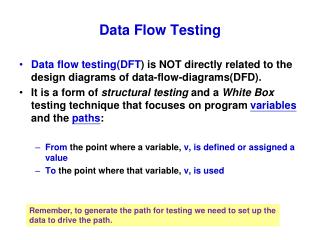 Data Flow Testing. Data flow testing(DFT ) is NOT directly related to the design diagrams of data-flow-diagrams(DFD). It is a form of structural testing and a White Box testing technique that focuses on program variables and the paths : Data Flow Diagrams - . introduction. ssadm what is a data flow diagram? why do we use dfds? levelling conventions

Data Flow Diagrams - . objectives: to define what is meant by structured analysis to define the symbols used in a data

Data Flow Analysis - . the material in these slides have been taken from &quot;lecture notes in static

Data Flow Testing (DFT) - . data flow testing is not the same as constructing design diagrams in the form of

Data Flow Diagrams - . documenting the flow of information within a system. a data flow diagram (dfds) describes the flow