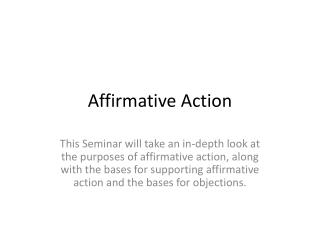 AFFIRMATIVE ACTION IN 25 YEARS: Will We Need It? - . prepared for the fashp colloquium washington, dc education trust,

An Introduction to Action Recognition/Detection - . sami benzaid november 17, 2009. what is action recognition?. the

TAKING CORRECTIVE ACTION: - . dealing with the problem employee. objectives. be able to explain the different processes

Theory of Action Template (1) - . …then we will impact the core in these ways… . …and we will reach our student

Affirmative Action - . “positive steps taken to increase the representation of women and minorities in area of