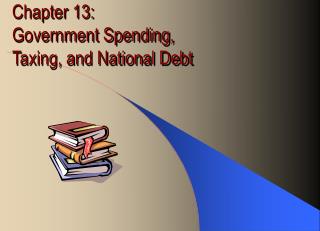 Chapter 13: Government Spending, Taxing, and National Debt. Size of Government. Government expenditures as a percentage of GDP have grown from 23% in 1960 to % in 199 Expenditures of Federal government have risen from 17% to % of the GDP between 1960 and 199. Deficits , Surpluses , and the National Debt - . tax his car, tax his gas, find other ways to tax his ass tax all he has