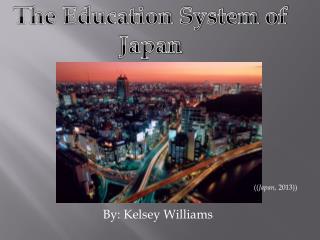 The Education System of Japan. By: Kelsey Williams. ( ( Japan , 2013 ) ). Japan is made up of four large, main islands and 3,000 smaller islands. The larger islands are Honshu, Hokkaido, Shikoku, and Kyushu. The G.M.O Quiz - By: megan and kelsey (click anywhere on the screen to move to the next slide.) what is deoxyribonucleic