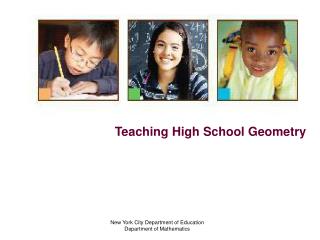 Teaching High School Computer Science… - . … as if the rest of the world existed. problems implementing effective

Co-Teaching in High School - . enhancing achievement for students with disabilities. essential questions: at the

Teaching College Geology in High School: - The concurrent challenges and opportunities of dual credit programs to

Geometry in school - . by lacy morse. c ircle. a circle is flat it has no vertices , edges or faces but this one does . s

Teaching Nutrition in Middle School and High School Classrooms - . why worry about nutrition?. diet is linked with 5 of

Teaching Web Design to High School Students - . what to teach students how to teach it sample projects audience

Teaching with Moodle at Lapel High School - . g. lee griffith, ph.d. what is moodle?. moodle is a lms learning management