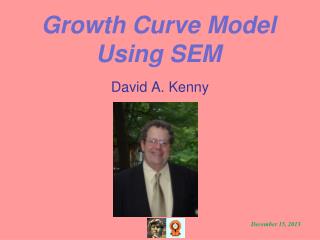 Growth Curve Model Using SEM. David A. Kenny. Thanks due to Betsy McCoach. Linear Growth Curve Models. We have at least three time points for each individual. We fit a straight line for each person: The parameters from these lines describe the person. Nonlinear growth models are possible. Growth Curve Models - . thanks due to betsy mccoach david a. kenny august 26, 2011. overview. introduction estimation of

The Growth Curve - S-curves. the term growth curve" (or s curve") represents a loose analogy between growth in

SEM Model Fit: Introduction - . david a. kenny. definition. fit refers to the ability of a model to reproduce the data

Using the Normal Distribution Curve - . 68% of the data fall within 1 standard deviation of the mean 95% of the data