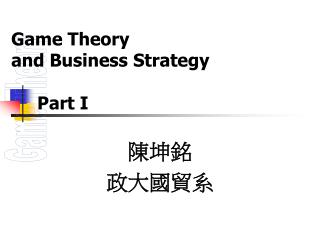 Economic Environment of business - . lectures 3 and 4 oligopoly and game theory. market structures. i. conditions for

The Business Strategy Game Overview and Orientation - . what is the business strategy game all about?. it’s an online,

Game Theory - . part 1: introduction and types of games. what is game theory?. game theory is the study of the strategic

Game theory - 1 - . eco 474 economics of war and peace. game theory. structure a simple game in both matrix and tree

MAN 6721: Applied Strategy and Business Policy - . dr. marshall schminke spring, 2012. these slides are intended to be a