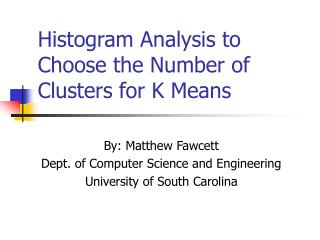 Histogram Analysis to Choose the Number of Clusters for K Means Histogram Analysis to Choose the Number of Clusters for K Means. By: Matthew Fawcett Dept. of Computer Science and Engineering University of South Carolina. Overview. Importance and use K means cluster algorithm The changes and adaptation I used Results Conclusions and Future Work.

Histogram Analysis to Choose the Number of Clusters for K Means

Machine Learning &amp; Data Mining - . what is machine learning?. a branch of artificial intelligence, concerns the

Cluster Validation - . cluster validity . for cluster analysis, the question is how to evaluate the “goodness” of the