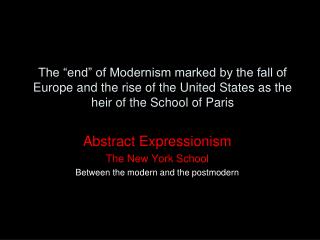 The “end” of Modernism marked by the fall of Europe and the rise of the United States as the heir of the School of Paris. Abstract Expressionism The New York School Between the modern and the postmodern.

i nvention of abstraction - . abstract art came about in the early 20 th century (1900s) after expressionism &amp;

2.4. The Postmodern and Constructivist Challenge - . learning objectives: understand the principles of constructivist and