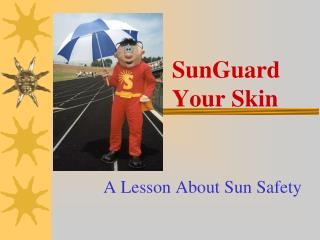 SunGuard Your Skin. A Lesson About Sun Safety. Learning Objectives . At the completion of this program, students will be able to: Identify three negative effects of unprotected, excessive sun exposure Sun Safety Lesson 1 - Grade 5. sun safety lesson 1. lesson objectives. learning about your skin what can happen if you

SUN SAFETY - . protecting yourself from uv radiation. what is ultraviolet radiation?. the sun is the energy source that

Sun Safety - . having fun in the sun while protecting yourself. sun safety. overexposure to the sun’s ultraviolet (uv)

Lesson: Safety - . the most important part of an experiment is:. safety. follow instructions carefully. an important

A lesson about syllables - . a less-on a-bout syl-la-bles. definition. ways to divide up words a syllable always contains

Lesson 1: The Sun - . what would earth be like without the sun?. how would you describe the sun?. what is the sun?. the