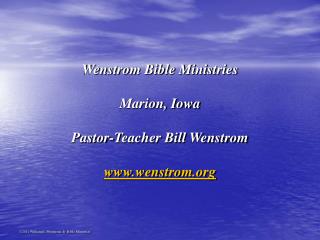 Wenstrom Bible Ministries Marion, Iowa Pastor-Teacher Bill Wenstrom www.wenstrom.org. Thursday September 29, 2011 1 Timothy: 1 Timothy 6:8-We Are To Be Content With The Essentials Of Life Lesson # 130. Please turn in your Bibles to 1 Timothy 6:3. The Role of the Pastor - . the role of the pastor is not personally to do all of the needed ministry of the church (like