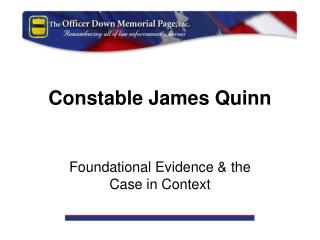 Constable James Quinn. Foundational Evidence & the Case in Context. Quinn ELECTED & Oath of Office. Dec. 12, 1853: the Night Watch was paid for EXTRA SERVICES re: the 12/04/53 arrests of REES & Parmilee. Gwen John - . artist of the month at griffeen valley educate together. early

Swearing An Oath James 5:12 - Does james condemn all swearing?. notice that jesus swore to tell the truth under oath. mat

Who was James Cook? - . james cook was an englishman who wasÂ born in 1728. cook came from a poor family, and was