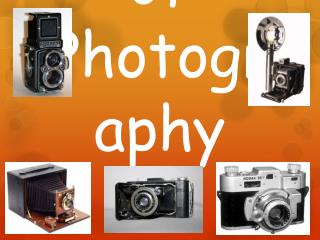 History of Photography. What does the word, Photography , actually mean?. Photography:. We owe the name "Photography" to Sir John Herschel , who first used the term in 1839, the year the photographic process became publicly known and used.

History of Photography - . photography was one of the many inventions of the 19 th century– the electric light, the

Timeline of the History of Video Production - . by: jaxson allen. the first video camera was made on april 15, 1956.