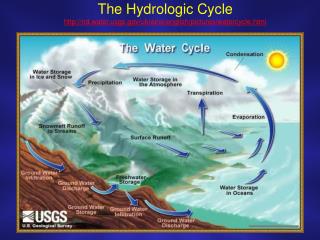 The Hydrologic Cycle http://nd.water.usgs.gov/ukraine/english/pictures/watercycle.html. Water as Property. Water is unique. Why? It is “a moving and cyclical resource” Water is a common pool resource States generally claim ownership over water

Hydrologic Overview &amp; Quantities - . it is important to understand the big picture when attempting to forecast.

The Water (Hydrologic) Cycle - . earth has a limited supply of water. this supply is constantly being recycled between

What is the water (hydrologic) cycle? Why is it important? - . the hydrologic cycle.

Hydrologic Cycle - . aquifer —a body of rock or sediment that stores, filters, and transmits water through pore spaces

An Introduction to The Hydrologic Cycle - . hydrology focuses on the global hydrologic cycle and the processes involved

THE HYDROLOGIC CYCLE - . a true cycle with no beginning or end…. nice and simple. the hydrologic cycle. defined as the

The hydrologic cycle - . the story of a drop in the proverbial “bucket”. ocean storage. what percent of earth’s