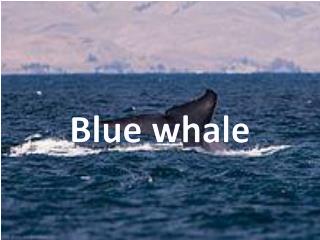 Blue whale. Facts. The great blue Whale is the largest animal to ever to live on the planet only resembling the dinosaur, Argentinosaurus The largest Blue whale to ever live is a female who weighed in at 177 metric tonnes.

The Blue Whale - . by: cole. gifts.worldwildlife.org. habitat. whales are in the ocean and in the entire globe except n.

All About Blue Whale - . the blue whale is an endangered animal. this powerpoint will give you information about where a

Blue Whales - . how to measure a blue whale!.

The Blue Whale’s Sexual Reproduction - . offspring. called “calf's” produce one calf at a time. weighs 5,000 to

The blue whale lives in ocean water around the world. - Blue whales have a blue body, and white spots on its back. they Whales - . by: jenny tran. blue whale. the blue whale is the largest living animal. it is an endangered species, and can

All About Blue Whales! - . by : michelle mr s anderson 4th. all about blue whales!. whales are huge swimming mammals.

Big as a Whale - . algebra 2 project 1 st quarter. how big is a whale – really?. how many students from our class would