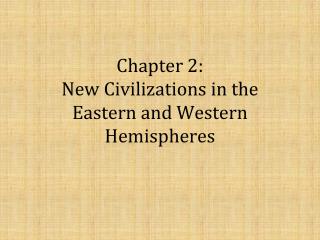 Chapter 2: New Civilizations in the Eastern and Western Hemispheres Chapter 2: New Civilizations in the Eastern and Western Hemispheres. Key Terms. Loess- A fine silt deposited by wind and water. Shang- The dominant people in the earliest Chinese dynasty for which we have written records.

Chapter 2: New Civilizations in the Eastern and Western Hemispheres

Chapter 31: Western Society and Eastern Europe in the Decades of the Cold War - . by: alex cott, seth manilove, robert

Intro to Eastern Civilizations - . write what you know about each topic as it is presented on the slides.

Chapter 31 Western Society and Eastern Europe in the Decades of the Cold War - . by: alexandra bowling and corin osborn.

Americas and Eastern Civilizations - . how do gender relations develop in early chinese

Hemispheres - . what is hemisphere?. a hemisphere means half of a sphere. hemi= half sphere= circle or globe. there are 4

HEMISPHERES - . the earth can be divided into four parts or hemispheres: northern southern eastern western. earth’s

The Hemispheres - . learn how the hemispheres of the brain work differently. hemispheres. both sides control the same

Hemispheres - . miss lynch 6 th grade social studies. what is a hemisphere?. a globe, much like the earth is in the shape

Conceptions of the Self in Western and Eastern Psychology - . philosophical origins of the soul. freud- ego. alfred

First Civilizations: The Ancient Eastern Mediterranean - . sswh1 the student will analyze the origins, structures, and

Hemispheres - . equator- circles the earth like a belt. separates the northern and southern hemispheres. prime meridian-