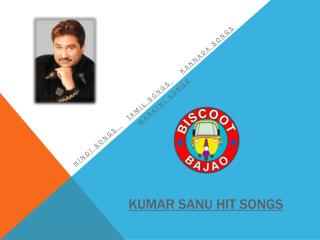 Kedarnath Bhattacharya, better known as Kumar Sanu (born 20 October 1957), is a leading Indian singer. He is noted for his contributions as a playback singer in Bollywood. He was awarded the Filmfare Best Male Playback Singer Award for five consecutive years. In 2009, the Government of India awarded him Padma Shri, India's fourth highest civilian honour, in recognition of his achievements