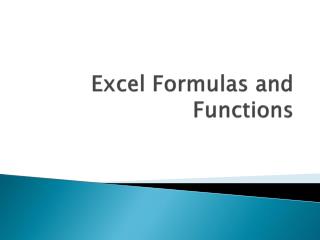 Microsoft Office Excel 2003 - . tutorial 2 – working with formulas and functions. use excel’s functions. you can

Working with Formulas and Functions - . lesson 5. learning goals. the goal of this lesson is for students to

Formulas and Functions - . an introduction. formula basics. all formulas begin with “=“ simple/common formulas use: *

MICROSOFT EXCEL - . what is excel? a software application which is part of the microsoft office suite which performs

Getting Started with Formulas - . this tutorial will teach you how to enter formulas and math operators for calculations