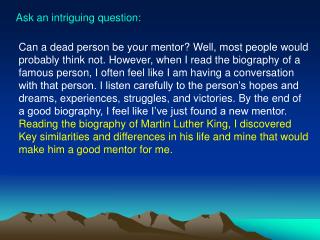 Ask an intriguing question:. Can a dead person be your mentor? Well, most people would probably think not. However, when I read the biography of a famous person, I often feel like I am having a conversation with that person. I listen carefully to the person’s hopes and Intriguing Introductions - . a guide to writing introduction paragraphs. you can think of the progression of ideas in an

Ask an Expert – You! - . what do i need?. process:. kim will ask a question three minutes to write down answers/

Can I ask a question? - . can i answer this question?. i am sorry. i don’t know. i don’t understand. can you repeat

Ask a question: What is happening? Why? - . why do these float?. density. what is density?. density is a ratio of how

Ask an Expert - . using the extension ask an expert system. what is ask an expert?. replaces answerlink a way for the