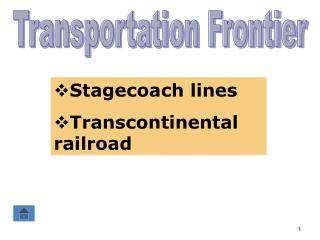 Transportation Frontier. Stagecoach lines Transcontinental railroad. Early long-distance travel was usually by stagecoach. It could be very unpleasant in poor weather, with careless drivers, and on muddy and bumpy roads.

Frontier Fashions of the 1860s - . by: emily covert a nd jasmine sinclair. design of their clothes. they made their

RAILWAY TRANSPORT IN TURKEY - . hacer uyarlar board member of utikad. railway transportation. total length of the

Adapting to The Environment and Use of Agriculture in Texas - . texas history bonham middle school 2013-2014. table of

Chapter 2 From Frontier to Statehood - . the ice ages. 1. the first “americans” migrated from asia during the ice

A New Frontier: Life of the Early Settlers - . settlers arrived in the new colony of jamestown, virginia in 1607 and