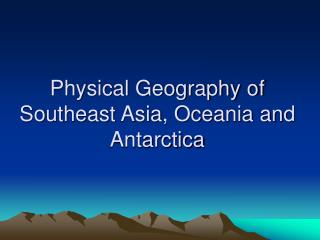 Asia: Physical Geography - . sswg5 the student will describe the interaction of physical and human systems that have

Physical Geography of Southeast Asia, Oceania, and Antarctica: A Region of Extremes - . this wide and varied region

Southeast Asia - . warm-up 4/7- what countries are part of southeast asia? . physical geography . one of the most