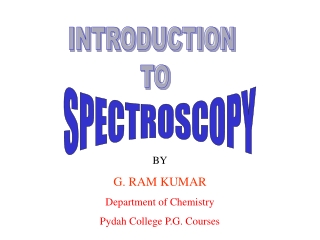 INTRODUCTION TO. SPECTROSCOPY. BY G. RAM KUMAR Department of Chemistry Pydah College P.G. Courses. INTRODUCTION TO SPECTROSCOPY It is the most powerful tool available for the study of atomic and molecular structures. It is used in the analysis of wide range of samples.