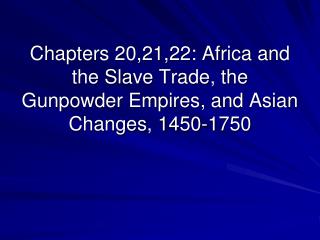 Chapters 20,21,22: Africa and the Slave Trade, the Gunpowder Empires, and Asian Changes, 1450-1750. Africa: 1450-1750. No longer aligned with the Islamic world trading system Forceably brought into the Atlantic trading system Heterogeneous societies and cultures. The Empire of Mali.

Gunpowder and Empire - . gunpowder…. first used in warfare by chinese in 10 th century used by ming dynasty in

The Slave Trade and Africa - . by: gaby pavia , ben osborne, daisha holton, and jack kim. central question. how did slave

Africa and the Africans in the Age of the Atlantic Slave Trade - . chapter 20 focus questions: why/how did slave trade

The Slave Trade - . what was the impact of slavery on africa and how did the africans resist?. trading ship. the

THE SLAVE TRADE - . by grace matuta 8x1. the slave trade. the over growing european empires in north, south and central

Origins of the Slave Trade out of AFRICA - . slave trade. ancient slavery under the roman empire , would not

The Trans-Atlantic Slave Trade - . the history of slavery. slavery became popular in europe during the renaissance