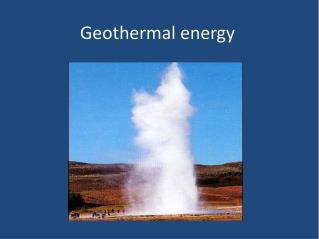 Geothermal energy. Introduction. Running out of traditional energy sources such as hard coal, natural gas and crude oil makes us contemplate the future of world power industry. Today’s high standard of life of the industrialized world inhabitants is possible only thanks to the use of energy. GEOCHEMISTRY OF GEOTHERMAL SYSTEMS - . water chemistry. chemical composition of waters is expressed in terms of major

Energy - . chapter 13. section 13-1. what is net energy and why is it important?. basic science: net energy is the only

Unit B – Energy Transformations - . chapter 5 – energy transformations. in this chapter you will learn: how to