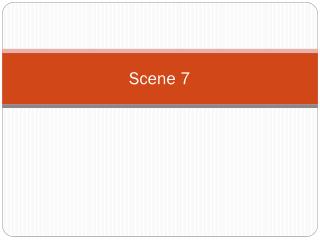 Scene 7. Summary . Revealing of Blanche’s past by Stanley Conflicting with her perception of victory over Mitch Destruction of Blanche’s future by Stanley

Scene &amp; Decora girls - . lorena. aritz. alazne. the girl of this picture called lottie styles. she belongs to a

MacBeth Act I - . axes paragraph. assertion. in act i, scenes 5 and 7 of shakespeare’s macbeth, indirect

Macbeth Introduction - . macbeth was written by shakespeare in 1605; it was the last in a series of four tragedies:

Macbeth Act 1 Summary - . act 1 scene 1. the witches are seen meeting. they ask where they shall meet again. they say

Macbeth Scene Questions - . eng 3c. act 1 scene 1. 1) what is the dramatic purpose of this scene? why do you think

Formatting your Scene - . how to format your scene(s) dialogue. character name  wryly or parenthetical (actor’s