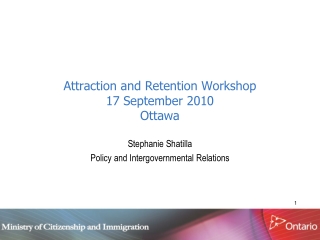 Attraction and Retention Workshop 17 September 2010 Ottawa. Stephanie Shatilla Policy and Intergovernmental Relations. Why immigration matters to Ontario. Immigration will be key to the continued healthy growth of Ontario’s working-age population. Attraction and Retention in VET - . an rmit perspective. objectives in attraction and retention. to ensure that rmit is

September 17 th , 2010 - . intro to mock trial. sponge activity: socratic seminar. read the handout that was given to you