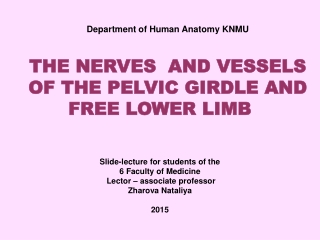 Chapter 8 The Skeletal System - . overview of the skeleton the skull the vertebral column and thoracic cage the pectoral

Pelvic Girdle-Lower Limbs p. 158-161 - . pelvic girdle consists of two coxal bones that articulate with each other

The Skeleton: Part C - 7 . the skeleton: part c. appendicular skeleton. bones of the limbs and their girdles pectoral

Lower Limb - . introduction lower limb is designed to support the body, its weight &amp; it is mainly responsible for

HIP JOINT - . it is one of the largest joints in the body. it is the connection between the lower limb and the pelvic