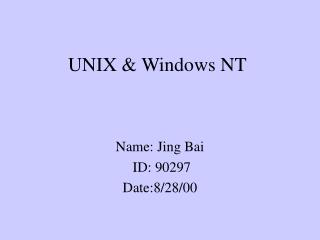 UNIX - . unix has been around for almost 30 years. that maturity brings a stable, mature high-end operating system

Unix for Bioinformaticists: Unix Tools, Emacs, and Perl - . helpdesk at stat.rice.edu aug 2004 some slides are borrowed

Cygwin - . tutorial 1. what is cygwin?. cygwin offers a unix like environment on top of ms-windows. gives the ability to